This is a story of the two extraordinary wedding from Ramayana and Mahabharata combining two epics were Ram breaks the bow of Lord Shiva and wins Sita in swayamwar and on the other hand Arjun successfully shot the fish eye and wins Draupadi in swayamvara. First I shall start from Ramayana were Ram wins the royal competition of the swayamvara and gets married to Sita.

Janaka, the king of Mithila knows that Sita was born from the Earth so he decided to organize his daughter’s swayamwara in an extraordinary way. As Sita grew old Janaka organized a swayamwara in an extraordinary way as planned earlier. Many kings and princes from neighbouring province came to attain this swayamwara. King Janaka announces that he had a mighty bow, which was blessed by Shiva. Those who can string the bow, he will be the husband of my daughter.

The competition of swayamwar had begun. One by one the princes tried to their best to lift the bow but got failed to even lift the bow. King Janak got upset. When Ram entered in the competition he lifted the bow easily with one hand and strung it with a thunderous twang. The bow broke into pieces.

Seeing this skill King Janak and Sita‘s joy had lost their limit. Sita came towards Ram and put a garland on his neck. The wedding became successful and celebrated with joy. 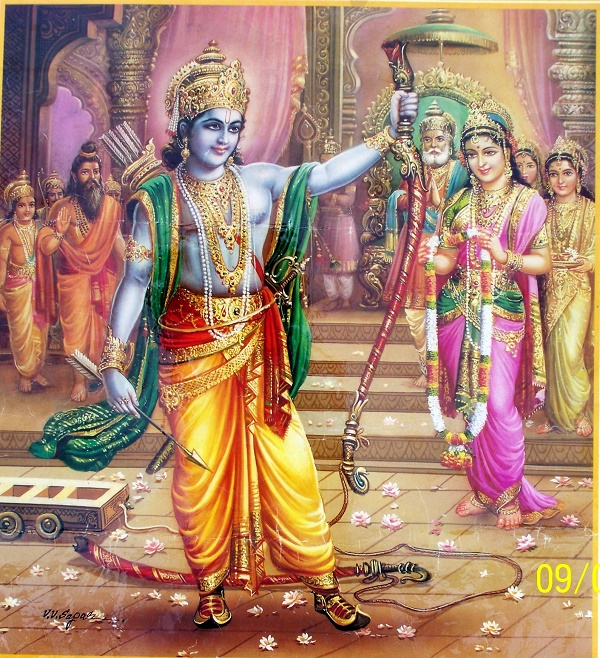 Now I shall narrate the story of Mahabharata were Arjun wins Draupadi in the swayamwara.  As king Janaka, Drupad the king of Panchal decided to organize his daughter’s wedding in an extraordinary manner because he knows that Draupadi was born from a divine fire.

As Draupadi grew old Drupada arranged the swayamwara for his daughter. In swayamwara he arranged a royal competition. Princess and kings from neigboring provinces and other neighboring countries got invited for this swayamwara. Pandavs also entered in swayamwar disguised as Brahmin.  At the centre of the court a pole was erected over which there was a revolving wheel. On the wheel was a wooden fish. At the bottom of the pole there was a pan of water. The one, who can shoot an arrow at the eye of the revolving fish while looking at its reflection in the water below, would marry Draupadi. Many princess including Duryodhan, Dushasan, Shishupal and Jarasandha tried to lift the bow but failed. When Karn entered in the competition he lifted the bow but when he was about to shoot the target. Draupadi stopped Karn and said, “I will not marry a charioteer’s son. Karn got offended from Draupadi’s   comment and left the court.

Drupad became worried about his completion of Draupadi’s swayamwara. Suddenly Arjun dressed as Brahmin entered into competition and shot the target with ease. Drupad and Draupadi got very happy and put the garlad on Arjun’s neck. All the princes became jealous and trying to attack Arjun but Bhim protected Arjun and defeated the princes. Pandavs took Draupadi with them.

When they reached to the hut Pandavs told Kunti, “we had got something for you.” Kunti replied,”share it among yourselves.” But when she saw the bride and was told that she was Arjun’s wife, Kunti was very upset at what she had said. As a custom Pandavs had to obey their mother’s order and thus Draupadi become the wife of all five Pandavs. Just then Krishna entered to their hut. He told Kunti,”In her previous birth she worshipped Shivji to get a husband of five qualities but shivji granted her that in her next life she would marry five men each having one quality. On hearing this Kunti got satisfied and Draupadi became the wife of all five Pandavs. 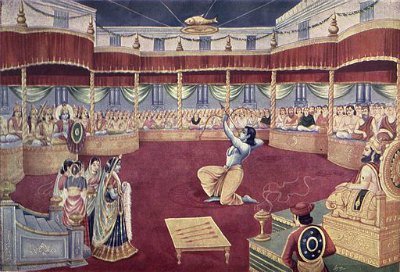 This is how the extraordinary marriage happened in Ramayan and Mahabharat .

Is it not interesting?