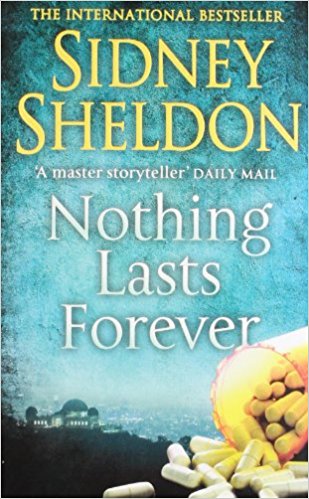 Nothing Lasts Forever is a quasi-medical romance novel by mega-author Sidney Sheldon. It is a story of three young doctors, their dreams, their hopes, and their unexpected desires. It lays bare the fears and ambition of lovers and betrayers, killers and healers.

The story revolves around the lives of three doctors, Dr. Paige Taylor, Dr. Kat Hunter and Dr. Betty Lou Taft (Honey) of a major hospital. As the novel begins, Dr. Paige Taylor is on murder trial, she is accused for the mercy killing of a patient who have transferred one million dollars in her account. Her situation is pretty bad as one after another every witness is against her. A witness’s statement that an eminent surgeon told that Dr. Paige Taylor is incompetent, takes Paige five years back. She meets Kat and Honey at Embarcadero County Hospital. Since they were the only female residents at the hospital, they bonded pretty well and started sharing an apartment. Paige Taylor, the dedicated one was still holding the light for her long lost love. Kat Hunter, an African American who has lofty ambitions has sworn off men after her abusive stepdad got her pregnant. Honey Taft, the dull, plain southern belle in a family of brilliant overachievers compensated her lacking by learning diligent techniques from Kama Sutra. Her techniques always gets her professional niche but everything becomes mess when she seduces a doctor and his wife commits suicide, Honey then comes to San Francisco to start anew. These three were caught in the middle of male dominant medical world where they are trying to prove their worth. As the story proceeds, heart-broken Paige falls in love with an architect, Jason. Tough Kat Hunter falls for a colleague, Mallory who is only with her for a bet. Honey finds true love in an Irish man. Their lives turns upside down when Kat gets killed mysteriously, Honey gets almost exposed for misdiagnosing, and Paige gets accused for mercy killing of a patient.

The plot of the story is mysterious. The story is set in California in the era of 1980s to 1999. Sheldon has explained the rigors of the medical intern’s lives in a very detailed glory: grueling hours, sleep deprivation, sexual harassment, petty professional backbiting, and incompetent doctors. Like his every other novel, every character in this novel has got a story of their own. All of them are connected by a thin thread. The tone of the story is suspenseful. Through this novel, Sheldon has shown that rosy dreams and harsh reality is separated by a fragile thread of destiny. These are some of my favorite quotes from the novel

“You have two choices. You can keep running and hiding and blaming the world for your problems, or you can stand up for yourself and decide to be somebody important.”

“There are three classes of human beings: men, women, and women physicians. —SIR WILLIAM OSLER”
“Nothing lasts forever. Nothing. How could everything have gone so wrong…so wrong…so wrong…”
Aficionados of stereotypes and clichés in every page makes it an extraordinary read. Nothing Lasts Forever is definitely page turner will collaboration of interesting twists and turns. Read the novel, you will enjoy it.